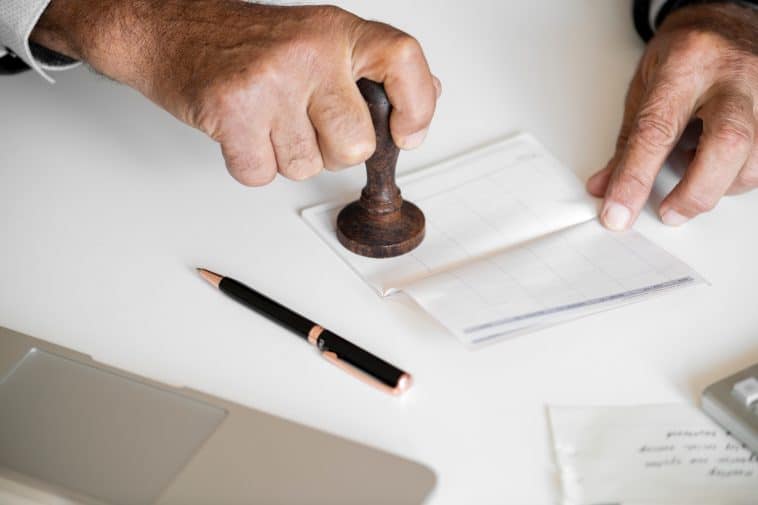 In the Western tradition, people are used to signatures as a way of closing the deals (for example, when buying a house) or as a personal identifier that gives you access to many services which presume personality identification (e.g. banking).

In Japan, people use Hanko stamps (also called Inkan) instead of or in addition to signatures. Everyone in Japan has their own Hanko, including the Emperor. Even Japan as a country has its own Hanko called the “Kokuji” which was made a decade and a half ago. Just like many other aspects of Japanese business culture, Hanko steams from a long tradition that is still practiced today.

If you plan to start a company in Japan, you will need a Hanko for many different purposes in your operations. This page will guide you through the basics of Hanko/Inkan, its importance, and application in everyday and corporate life, as well as practicalities of arranging for your own seal in Japan.

Understanding the use of Hanko/Inkan seals

What is a Hanko seal?

Hanko, in the simplest of forms, is a personal stamp to verify your identity in Japan. It is similar in functions to a signature or a password. It contains a person’s name in kanji (Japanese characters), katakana alphabet or Latin version of the name on its stamping surface. Almost everyone in Japan has at least one. Many have more. Hanko has become an important part of everyday culture and operations in Japan.

Hanko seals come in different shapes, materials, designs, and sizes. However, generally speaking, all the Hankos can be divided into two large groups: personal and business Hankos. First, let us take a look at personal seals in Japan.

There are three basic types of Hanko: Mitome-in, Ginko-in, and Jitsu-in. They are distinguished by how often and in which situation they are used. Below is the short description of each Hanko seal type.

Mitome-in means “recognition seal” in English and it is the cheapest and most casually used Hako of all three types. It can be used to sign basic contracts in the office or as a signature in simple daily procedures. Hankos called “shachihata” are still a popular alternative to a “check-in” system at workplaces.

Ginko-in means “bank tamp” and it is primarily used for banking purposes as the name suggests. This type of Hanko is more official compared to Mitome-in because it is registered with the bank. Ginko-in is needed to open, get access, and manage your bank account(s), or to get a loan.

Some banks do not require this type of Hanko seal from foreigners. However, be sure to check the exact information from your bank.

Jitsu-in means “official seal” and it is the most important and powerful of all the Hanko stamps. Each of them is unique in design and details and must be registered with the government. Thus, every Jitsu-in Hanko looks different from the others, despite the fact that some Japanese people have the same names.

It allows to protect the owner of the seal from instances of forgeries since the original design of every stamp is securely archived by the government. If there are doubts about the authenticity of a Jitsu-in seal, impressions can be compared to the originals held by the government. That is why unlike a Mitome-in, where you can put a part of your name or your casual name, Jitsu-in has to be inscribed with your official name the way it is written in your ID (see the next paragraph).

Jitsu-in Hankos are usually reserved for the most important transactions, like buying a house or starting a company. This type of stamp comes with the “Inkan card” that allows you to print out the certificate of registration for your Jitsu-in. Such certificates are often provided as an attachment when you impress you Jitsu-in stamp onto the document.

Traditionally Hanko seals are inscribed with the owner’s name. For a person with a Japanese name that is usually 4 or 5 Japanese characters called kanji. The surface of the stamp is more than enough to fit a Japanese name in full length.

However, in the case of non-Japanese names situation is different: there are no kanji for the majority of non-Japanese names. Thus, you can either use a katakana transliteration or your original name written in Latin letters. Still, sometimes the whole name will not fit onto the surface.

In such cases, it is possible to use only a part of a name. This option is viable for almost any types of Hanko, but there are some things that you have to keep in mind when choosing the name to be inscribed on your seal.

Due to their half-formal nature of Mitome-ins, they can contain almost any inscription: for example, only your first name, or the short name, or initials, etc.

However, It is important to remember, that for a Ginko-in and especially for a Jitsu-in you have to have the official transliteration of your name (either in Japanese or in Latin) exactly the way it is written in your passport, residence card, bank card, etc. You can still use a part of it, but it has to coincide with your identification documents.

As it was already mentioned in this article earlier, having a stamp is an important part of doing business in Japan. If you are just visiting Japan for a short time will you most likely have no need any Hankos. In many daily, business, and banking-related situations it can be replaced with a signature. Especially if you are acting as a sole entity (as a person, not as a corporation).

However, if you are starting a company and plan to stay for a longer time, you will need at least two Hankos. Some companies might have even more stamps for other miscellaneous duties, for example, invoicing.

Still, the classical option for many companies is a set of three Hanko seals that are the same in functions to the personal Hankos. These are Kaku-in, Ginko-in, and Kaisha Jitsu-in. Let us take a look at them and their application.

This is a square stamp that is basically a Mitome-in for a company. Since there can potentially be many people in the company, the personal stamp of its director or other representative is not enough. Mitome-in can represent a person on a document, but Kaku-in represents the whole company at once. However, it is still the less formal of all the corporate seals and can be pressed onto the least significant documents.

This Hanko seal serves the same purposes as a personal Ginko-in, but it also represents the whole company. That is why instead of a person’s name it has a double circle that contains a name of the company on the outer side and the “corporate seal for banking” on the inner side. These stamps are registered with the bank and are more powerful and official then Kaku-in seals.

This is the most important and the most powerful stamps of all. Similar to corporate Ginko-in, it has a double-circle containing company name on the outer side and representative’s name on the inner side. Usually, Kaisha Jitsu-in is used in pair with the Kaku-in. These Hankos must be registered with the Legal Affairs Bureau where your company is registered.

Cost of a Hanko seal

These stamps can vary in price significantly. You can find the cheapest ones in 100-yen shops like Daiso. At the same time, custom-made Hankos registered with the government from the specialty shops can go over 10 000 yen or even more. Factors that determine the cost of your Hanko include, but are not limited to:

There are numerous companies that produce all types of Hankos in a wide price range. You can even order Hankos through the internet. For example from the biggest retailer Hankoya or Askul (both are in Japanese only).

Typically, a personal Hanko costs somewhere around 3 000 yen. Company Hankos, that usually come in a set of 3 pieces, start at around 8 000 yen and can go up to 20 000 yen or more per set. However, It is up to you which company you would like to use when ordering a Hanko and how much you are ready to pay for your seals.

Hanko is an important part of life in Japan. You will need it for daily operations and business. Usually, people and companies have a set of three stamps. Each stamp has the different level of “power” and the scope of application.

Personal Hankos bear the name of the owner while corporate seals bear company’s name. It is important to get your name correctly spelled on your stamps so that they have legal power. The best option is to use the same spelling as in your passport or a residence card.

Hanko seals vary in prices depending on their size, material, and designation. The cheapest ones are sold in 100-yen stores like Daiso, more expensive ones can be bought from the specialty stores and there is no upper limit to their costs.

How many Hankos do people in Japan usually have?

While some Japanese might have three different Hanko, two is enough and fairly standard. One Hanko can be a Jitsu-in and the other one can be used for all the other purposes.

How often Hanko seals are used?

People in Japan use their Hanko quite often. For example, when signing the documents, for banking or in the office. The frequency of Hanko use also depends on a type of the stamp. Mitome-in is used more often than other types. And a Jitsu-in can be used two or three times during the whole life.

However, as a foreigner, you are able to use Hanko less often. In many cases, you can substitute a Hanko with a signature.

Can a personal Hanko be square?

Typically personal Hankos are round while square Hankos are reserved for companies. At the same time, a company can have round seals, but a personal stamp is always round.

Can I use the same Hanko seal for my whole life?

Hankos are valid if they are not damaged to the point where they lose their legal capacity. Keep your Hankos in a safe place not to lose them, and if they remain in good condition you can use the same seal for your entire life.

I lost my Hanko. What do I do?

If you lost a cheap Hanko that is not registered with any institution, that is not a problem. You can get a similar one from any shop.

However, if you lose a registered seal, such as a Jitsu-in Hanko, report it right away to where you got it registered so that authorities are aware of the situation. Also get a new Hanko and re-register it.

It is very important to let authorities know that the Hanko was lost. From the moment you have informed the authorities any documents stamped with your old seals will be considered invalid. If you will try to replicate the old Hanko without re-registering it such move can be considered an attempt at fraud and/or forgery.

Understanding the use of Hanko/Inkan seals